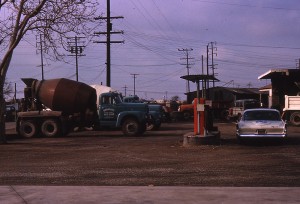 Spragues’ Ready Mix Concrete was founded in 1927 by C.E. Sprague, when Los Angeles was still a city in transition. With the new and burgeoning film industry, what had been an unimportant mid-sized town situated among orange groves and cattle ranches more than doubled in population. As roads were laid and houses raised, communities like Hollywood, Burbank, Montebello, Pasadena, Pomona and Glendale began to grow with an influx of opportunity-seekers from the rest of America and Southern California started to look like it does today.

In the early years our core business was trucking Rock and Sand as the San Gabriel Valley was being developed. During high school W.L. (Leroy) Sprague drove a truck for his father. After serving in the military during WWII, Leroy took over the operation of the business and added Ready Mixed concrete production to our list of services.

It was at the height of this boom that Spragues’ Ready Mix Concrete opened its first ready mix concrete plant in Irwindale to supply concrete and serve concrete contractors in Los Angeles, Pasadena and Southern California. Since then, our company has been at the heart of growth and construction in the Los Angeles basin, and has expanded its ready mix concrete operations northward into the San Fernando Valley and communities such as Malibu, Thousand Oaks and Ventura County with the opening of its Simi Valley concrete plant in 1976.

What Can You Do With Concrete